Hot water heater on a post—sounds like a fast food item. I sit warm and comfortable sipping coffee on this cold but windless Portland Friday, intermittent mysterious back-grabbing spasms notwithstanding. The motel-like parking lot view from the breakfast table window, provides an entertainment stage—on it, a far better production than one could ever pay for at a popular craft coffee shop.  I wake up Legolas and tell him he’s missing the show, the one that makes his computer gluttony possible.  I encourage him to at least watch and take his gratitude pill.  He disrespectfully declines.

There is a crew of five men, two long-arm trucks, one with a bucket, and a third tool-carrying truck.  The proper vehicle names I know not, nor their equipment.  I miss 99 percent of their procedures and methods and chide myself more than once for not anticipating when the next bucket move will be, consequently I’m not at the ready to observe precisely what and how they do it, whatever it may be.

The two bucket men’s body mechanics filter through my Therapist eye, and I sympathize with their presumed back problems.  My Storyteller initially mistakes the hierarchy of power, attributing the foreman role to the current tool man leaning over the bucket with the drill.  Later, I’ll paint the older gloved man behind him as the teacher, and the younger bearded one the apprentice.  How convenient to have a second pair of hands at your side, anticipating and obtaining each need in advance.  The foreman has that fatherly air of experience, been there done that, get ’er done in the simplest most conservative sequence. The ungloved mistake-prone apprentice reaches further, changes his mind, is careless of energy.  He’s the son! 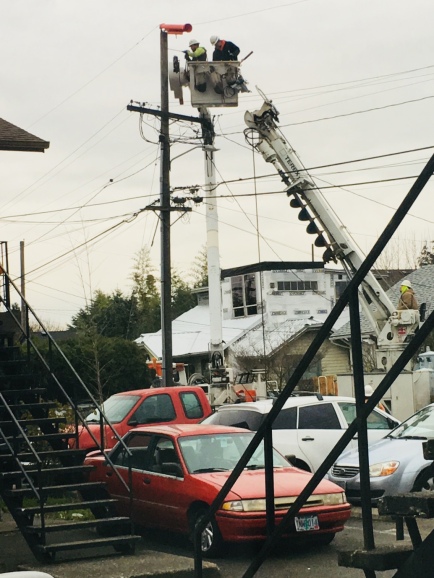 The two ground men operate the truck crane while the third and only helmetless man is the one I question and thank for the team’s taken-for-granted, challenging work.  “Changed out a transformer,” he replies when I ask on my way to the laundry room, what they just did.  In my shyness, I don’t ask enough questions or greet the bucket men as they dismount their stage.  From the other side of the window, I wished for the time to conduct a full-blown research project on electric company linemen, their training, pay, rules and regulations, differences between state laws, and so on.  When they’re standing right in front of me, I’m speechless, a lingering childhood defense mechanism.

When I arrive at the washer, it’s flashing, “re-select mode,” and has stopped at the 24-minute mark of the wash cycle.  I feel no irritation, knowing exactly what happened, now aware of the artisans who just maintained the energy conduit for the current and future workings of my modern lifestyle.  While darkness and candles fill me with a dancing glow, an aromatic serenity, and a balanced circadian rhythm, my dependence on the new transformer cannot be denied.

All of this, without even the mention of human, energy-sucking demands on the Earth…a topic mentioned in a book excerpt I conveniently read on my smart phone last night in my sleeplessness, via WiFi, via the router and the modem and the electrical outlet in the bedroom. “In the process of becoming civilized, we have become inhuman,” writes Terry Tempest Williams.  She and her husband have rebirthed The Story of My Heart by the nineteenth-century British nature writer Richard Jefferies.  It is, writes Terry, a “spiritual autobiography written by a man who lived to be thirty-eight years old, plagued with illness.” It is a book checked out on my library Hoopla e-book shelf, that I “lost” in the caverns of my mind and phone, yet came across two nights before it’s due date, when it will be invisibly and electronically returned.  It is indeed, a book that illuminates “dilemmas of modernity, the intrinsic need for wildness, and what it means to be human in the twenty-first century.”

I yearn for beauty, for the Earth, for the shelter dogs, Dagwood and Bucko of adopted rock-climbing parents. The couple left their apartment to live in a van where the four now explore nature with delight and abandon.  I know this, because Loveheart, my daughter, messaged the Facebook video to me last night, courtesy again, of the Internet, my phone charger, and bedroom electrical outlet… 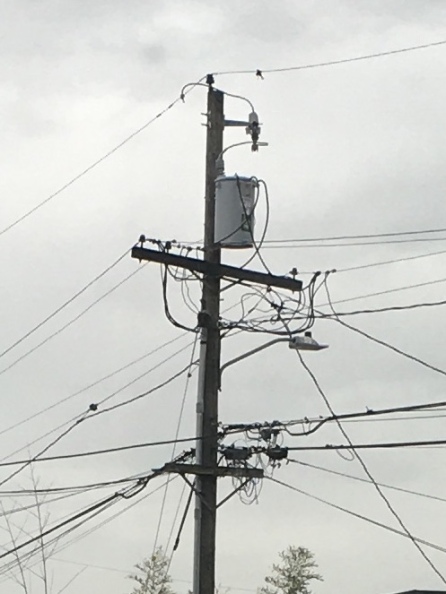