Not being one for war metaphors, I christened my malignant breast tumor, Scheherazade.  She was the storytelling character in One Thousand and One Nights. She creatively managed to stay alive and become Queen, after telling a thousand cliffhanger stories for a thousand nights to a psycho king who routinely married then beheaded the virgin-of-the-day to prevent unfaithfulness.

It has been close to 1,001 nights since I was diagnosed—May 11th, 2015, the same date of Loveheart’s senior awards banquet.  I got the call on the side porch of Discount Tire that afternoon.  “Well, Ms. Droplet, we did get your biopsy results back…”  But that’s another story.

Scheherazade was with me months, if not years, before her reality was medically certified. I’m sure she was there in March, when I traveled to Spain to visit Bam-Bam on his Spring Break.  She was there at Big

Bend National Park in February on a Sierra Club hiking trip.  She showed up at mile 7 of a 12-mile round trip South Rim hike.  My leg cramped more with each passing mile, and I could hardly walk the next morning, but she led me to a peaceful soak in the natural hot springs alternating with immersion in the cold Rio Grande opposite the hot tub wall.

Figuring out when she arrived was an initial obsession, and I figured she was mentioned in my morning pages before January 2015, but I never poured through piles of spiral notebooks and sloppy handwriting, run-on sentences to see when she first appeared.  Morning pages clear the mind via dumping—monkey-mind barfed out via pen and hand with stream-of-consciousness writing, 30 minutes a day.

Today I lay on a hospital table next to an ultrasound machine and computer screen, in the dark, ruminating about the ultrasound technologist’s instructions. “Stay here.  The doctor will come in and repeat the ultrasound, then talk with you.”

What? I had watched her face, as she did her work, pushing the transducer over my breast and simultaneously watching her screen. Her facial expression left no hint.  I saw no horror, or pasty color in her face, no sigh of relief or smile.  She spoke very little once she started with the warm gel and the pressure, gliding around the 2 cm area juxtaposed to my nipple.

How long did I lie there? It was a few minutes at most, before I sat up and twisted around to see the abandoned computer screen for myself. 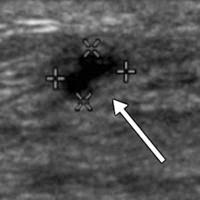 Five freeze shots, of a snow storm uglier than the one that was happening outside the window.  My breast images had a darkness that trumped the gray shrouding of the Willamette.  How could they interpret this stuff, I wondered as I tried to make sense of what I saw.  It made me sympathize with the conspiracy theorists out there.  I laid back down, staring at the ceiling tiles and chastising myself.  Boy is Denial a powerful thing.  When do we ever learn?  My mind was racing and I KNEW She was back.  Otherwise, why would the tech have gone to get the doctor to tell me?

“OMG, Legolas hasn’t gotten his driver’s license.  I waited too long.  I’m going to die and he won’t have his driver’s license yet.  I’ve got to make him follow through on that NOW. I can’t believe this.  I’m about to have an anxiety attack. Wait a minute. I don’t have anxiety.  I’m mindful.”

I breathed and called in Scheherazade.  In walked the radiologist, a young white male, starkly contrasted to my Texas providers that featured predominantly females of color.  “So, it’s really close to the skin…  Yes, go ahead and sit up.” He briefly babbled unmemorable phrases, before he finally gave me his verdict.

“You can rest easy. It’s probably a cyst. You don’t need to come back here for this. You can just follow up with your primary care physician.  I mean do come back for your annual mammogram.”

“Huh? Oh. Okay.  Well, how do you tell anything from those pictures?  Where is the cyst on there?  Where are the edges?”

But you know what?  I dragged Legolas out of bed when I got home, and at the end of the day he had converted his out of state driver’s permit to an Oregon permit and is scheduled for the driving test, backlogged to April.